This is the 16th episode of CrossFit Radio, which aired at 8am PST on January 4th, 2009. This is the first show of a new format. They are now going to three shows a week. Each show will now be focused around a single interview.

The next show will be Wednesday, January 7, 2009 at 6pm PST. Jeremy Thiel of CrossFit Central will be the interview. 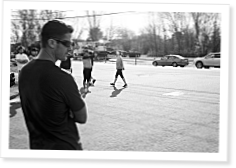 Thanks for the great interview guys! I have been working on my POSE method since around October. I realize that there is no going back. I did my first 10 k a few weeks ago using POSE and my calves were sore for about 3-4 days. I look forward to getting to a running cert, probably in the fall or next winter, unless comes to Western Canada in the summer. If I gotta go south for a cert, I'm going when it is freezing here!

Also, I like the new format. It seems a little more structured, which is good for us people with little spare time. Thanks again guys, I love the show!

One question though...at the beginning of the show Brian talks about trying to get back to the level of fitness attained by the paleolithic man but then doesn't advocate running bear foot (at first). Brian, do you recommend this simply due to the fact that if we tried to run bear foot we would shred our feet in the process? Those toe slipper things seem like a good rememdy for that. I don't have a pair but a bunch of my buddies do. I don't see the paleo guy owning running flats. Looking forward to getting out to one of your quality certs brother. Running, like many, is my nemesis and is something that I don't, but would like to enjoy doing.

Neil and J.J., like the new format, you two are really growing this radio stuff and I feel it catching on big for you. I know a ton of people like it. Thanks and keep it up!

Anyone familiar with this podcast thing? For some reason my iTunes won't download episode 14 - is there a way to get it to go back and download it?

I have to say, I enjoy this shorter episode format a lot more. Just interviewing one person reveals a lot of interesting things. I liked the discussion about shoes and POSE - I'd never been sold on it before because my running has never hurt me, but now I'm thinking I might actually give it a try.

Always "knew" there was a way to avoid orthotics. Thanks!

Similarly, I challenged my optomitrist about the same for my eyes. Why can't I do physical therapy on my EYES and stop paying for stronger lense perscriptions or possibly eliminate my need for glasses overall. (By the way, I've posed the question to two optomitrists, both took personal offense to the question and I received a condescending response.)

My thoughts: too many professions seem to be too willing to take our money in exchange for commercial solution instead of assuming that we are willing to get off the couch and solve our problems through body fundamentals. Go figure!