This is the second half of the talk (there was an extensive Q&A session, forthcoming). Coach Glassman explains both the basis for and implications of our comprehensive definition of fitness:

Work capacity, which is nothing other than human performance, must be evaluated in the same basic physical terms of MKS (meters-kg-seconds) used to describe the kinematics of everything else in the universe. How far can it move itself or another object, what is the mass (weight, colloquially) of that object, and in what time period? Anyone claiming to be able to deliver fitness in any form has an obligation to defend that claim with these universally accepted terms, familiar to eighth graders.

Coach asks, Why have these basic calculations not been done with athletes and soldiers? Well, they are being done now. CrossFit is the only place these criteria are consistently assessed in a measurable, observable, and repeatable manner.

Going one step further, in which domains can this performance be achieved? The demands of combat are varied and substantially unknowable. For soldiers to be fully prepared for war, they must be capable in both broad time and modal domains. 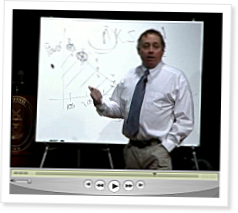 On January 6, 2009, Coach Greg Glassman was invited to give a presentation on CrossFit to over 100 future leaders of our nation’s military from the National War College at the National Defense… Continue Reading

On January 6, 2009, Coach Greg Glassman was invited to give a presentation on CrossFit to over 100 future leaders of our nation’s military from the National War College at the National Defense… Continue Reading

On January 6, 2009, Coach Greg Glassman was invited to give a presentation on CrossFit to over 100 future leaders of our nation’s military from the National War College at the National… Continue Reading

On Aug. 28, 2009, CrossFit founder and CEO Greg Glassman made an appearance on Fort Hood TV during a visit to the U.S. Army facility in Texas. Coach Glassman was invited to speak at… Continue Reading

I don't think there is a better way of having put it in the military's face. Being active duty, I've seen and heard some ridiculous things about PT, and some negative bias about CF. This puts it right at the top, and challenges them to bring something better to the table. I'm glad Coach Glassman had the opportunity to make this presentation, and give them something to chew on, and even better, hopefully act on.
Maybe some of the silliness will stop now.

This is a great presentation. My favorite quote: "if there is something better, we are looking for it, and we will adopt it. My commitment is to human performance, not to my method."

I am so impressed and happy to see where this is going and look forward to supporting it all the way.

I am thankful we have access to this speech. It shows where we're going; we have barely begun the innovation of human performance. I can't wait what the future has in store.

CrossFit is successful because it is like the NCAA Men's basketball tournament: you have an idea who might win, but there's a dark horse, a Cinderella who can come out of nowhere (I obviously loved his NCAA analogy). Sports movies like Hoosiers and Rudy are successful because they are inspirational. They show how ordinary people can succeed with bulldog determination while outsmarting opponents and/or obstacles. They know it is possible to succeed like them.

The only thing that we can be assured of in CrossFit is that dedication and sound planning will reward output. There is no fiefdom; this is truly market-driven. For Coach Glassman to present CrossFit to the audience in this video series shows how far CrossFit has come and shows how much CrossFit has to offer.

Having something like this at National War College is incredible. The potential of future military leaders taking the message forward has significance well beyond a local community. To me, that's the dream for any visionary--to make an impact at a national/global scale.

I'm looking for comments from Mr. Boyle an Mr. Poliquin :)

Great stuff COACH! We all appreciate you telling the TRUTH about the industry. Creating awareness is the catalyst to change.

"You learn something every day if you pay attention." -Ray LeBlond

Coach, you're a fitness revolutionary. I'll be surprised if crossfit is not a household name twenty years from now. Thank you for the objectivity that you have brought to the table.

Thanks coach, where the hell did you learn all this stuff from?jeez, you can sure humble a guys notion about his own level of education. On a more serious note, there is no doubt about the legacy coach will leave in the fitness world. His name will be mention along side of Jack Lalane,Eugene Sandow and others.Thank you for opening the eyes of the fitness world.

Loved both videos. Not real convinced that the military will adopt this though. I suppose I'm jaded but you have a bunch of bureaucrats in the room who are making decisions based on money and budgets. On top of that, who decides what programs are funded within the military? Politicians (Congress). Congress is at the whim of lobbyists and donors to their campaigns. There is a reason our military still uses less than adequate body armor and silencers (sound suppressors) for Spec Ops teams. The contracts have been bought without having to compete on an open market or displaying proof of their effectiveness. Don't believe me? Check out suppressor cans made by Surefire or body armor made by Dragon Skin. Obviously CrossFit is the best system we've seen or we wouldn't be part of it. I just have no confidence in bureaucrats or politicians. It will be a significant measure of Coach's abilities as a speaker if his voice can be heard through the political rhetoric and noise of bureaucratic chatter.

I agree with Shannon, but for different reasons. CrossFit is very much in line with Fiscal responsibility. The high level of fitness achieved given the comparatively small monetary and time commitment is something the military is interested in. However:
-The percentage of military people whose lives actually depend on their physical aptitude is very small compared to those who require no athleticism. This applies to senior leaderhsip as well, very few come from backgrounds where athletic ability was paramount to their job. They will not institutionalize a system that is actually necessary for a tiny minority.
-Success at CrossFit(or any serious strength/conditiong program) requires discipline, awareness, and personal honesty. Those traits are absent in the majority of our culture, and therefore our military. It is easier to institutionalize a highly ineffecient and ineffective Globo-Gym approach devoid of personal accountability. Military members who have a strong sense of discipline, personal responsibility, etc. naturally gravitate toward SOF, NSW, EOD, Inf... which require exceptional levels of athleticism so CF is a natural fit.

Very well spoken a always. I have heard most of that dozens of time and everytime I hear it I learn more and more from that man. The example Coach puts forth should inspire. I don't even care what the hell it inspires u to do, put to see someone speaking so intelligently and pasionatly about something they believe in, without caring what everyone around them thinks is above reproach. I make it a daily habit to represent the CF name in the best light I possibly can, not soley because it is fitness, But because Coach graciously allows us to use what he has mastered and created, to better all those around us. We are better thanks to what he has taken the time to accomplish. Thanks.

That was friggin' awesome! Confidence and passion from Coach Glassman.

I love the way coach uses simple and direct measurements of fitness to reveal how most of us (inc Mil) have been completely undersold by commercial fitness trends.

Cutting through the BS with a Crossfit sharpend knife.

Can't wait for Q & A. Really hope there are some great questions fired at coach so that he can begin the paradigme shift in the head shed of Mil.

You bring up some things I hadn't thought of. I'm not from a military background, but have been a cop in Southern California for almost 14 years. I suppose it resembles the military in personnel structure and not just ranks, etc. As you point out, those who gravitate toward the administrative tasks and promoting away from the front lines seem to be little interested in personal fitness, or if they do, they seem to do it half way. Those of us who are there to do get down and dirty if needed, want/need something that will help us in real life scenarios. It will take the real grunts who have promoted to positions of authority (few and far between) to tear the mindset away from "traditional" fitness routines and equipment.

CF is new to our household, it was very interesting listening to my wife's(newly attained exercise science degree) thoughts on Glassman's speech. She elaborated heavily on some of the discovered science or studies he was talking about. She was far more impressed with the coaches personal approach than the science end, although she is thoroughly impressed with the whole CF don't get me wrong . She had me attempting workouts quite similar in nature to CF before my last deployment. We are guard members and live in North Dakota so we are a little behind the times in discovering CF.

Daily I look forward to what is put out by the CF culture, keep up the good work.