Analysis of the Transition by Mike Burgener - CrossFit Journal

Analysis of the Transition

Coach Mike Burgener is one of the top Olympic Weightlifting coaches in America. In this clip from his CrossFit Oly cert on May 24, 2008, he analyzes the transition from the first pull to the second pull.

The body’s angles and positioning will vary significantly by body type for the first pull. But, by the end of the first pull and into the transition, almost all successful cleans and snatches look the same. The key, though, is to focus on positioning the bar properly (first pull) and jumping aggressively (second pull). The transition will take care of itself.

The jump in weightlifting is only high enough to slip a credit card under their shoes. Upward momentum must be created on the barbell, but any excess height delays getting under bar and leads to miss lifts. 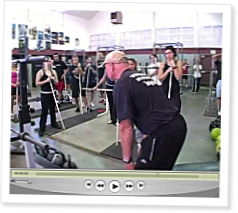 “I thought it was right on,” Burgener says of the… Continue Reading

Would you trade 2 minutes 38 seconds a day for a few PRs in the snatch or the clean and jerk?

If you would, then you need to start doing the Burgener Warm-Up and the… Continue Reading

Coach Burgener continues his session with Nick Hawkes on the snatch. In this video, Coach B takes him through the setup position and initial pulls, and a drill called halting… Continue Reading

2 Comments on “Analysis of the Transition”

I found the poster that they show in this clip with a google search. It was just under $30 with shipping and it has the snatch and clean side by side.
http://www.newton-sports.com/pages/poster.html (work/family safe link)

glad to hear that reinforced as I have seen people jump about 5" off the floor and noticed on tapes of myself that I am barely leaving the ground.