EC Synkowski is a CrossFitter. She’s also a trainer, and part of the traveling Level 1 certification team. She was built to row (according to those in the field), though she has no formal training and only moderate interest.

Last year, she competed for the first time in the Concept2 Crash-B 2K sprint event. She pulled a 7:11.2, which put her 24th in the world. So, she was looking forward to doing even better this year.

When registration opened for this year’s event, I quickly remembered how little row-specific training I’d done over the last year. Nevertheless, I still wanted to give a sub-7 2k a shot and registered. Plus, some other CrossFit Bostonians decided to compete and we were to have a post-race social. So, the event would be “fun.” If you have not rowed a 2k, I can assure you, however, the pull itself is not fun.

If my preparation for the 2008 event was minimal, my preparation for the 2009 event was non-existent. Not only had I not pulled a 2k since the 2008 Crash-B, but I had not pulled a single distance for max effort on the rower the entire year! Sure, I had rowed in various WODs (e.g. Jackie), but never a max 500m, 1000m, 5k, etc. I’m guessing the memory of discomfort from the 2008 event was enough that I have a subconscious aversion to the erg. And to be honest, I have so many other “goats” to work on that I consider rowing a strength, relative to, say, bodyweight metcons or gymnastics.

EC didn’t do as well as she wanted. She pulled a 7:15.2, which put her 36th in the world. She went out too fast, and crashed. Chris Wilson, from Concept2, offers insight into her strategy in a sidebar. 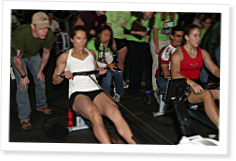 Headed to the Olympics: Erin Cafaro

When Syn Martinez walked into the arena… Continue Reading

In 2007, Erin Cafaro had been rowing for three years and had been on the U.S. national team for a year and a half.

The next year was an Olympic one, and Cafaro needed to get stronger. Through… Continue Reading

Cam Birtwell is a strength and conditioning coach at the Canadian Sports Centre Pacific (CSCP), as well as the owner of CrossFit Zone in Victoria, B.C. He works with specialists including… Continue Reading

Patrick Larcom, a coach at CrossFit Boston, seeks to bridge the gap between the sport of rowing and the sport of fitness. That’s why he created Renegade Rowing.

This one brings me back to my days as a former college rower about 10 years ago. I stll have a love hate relationship with the erg!
I encourage crossfitters to take the erg challenge and pull the 2000, it is a great equalizer. Mind over pain.

EC is a rockstar.

Can't wait to work with you again so you can kick my butt at another wod like you usually do!

Keep your friends close and your enemies closer. Make the erg a real good friend.

with your preparation it is a good score EC! Olympic rowers do a lot of workouts on the erg.

Try to perfect the start, around 20" real fast (gets your average down) and then go over at racing pace (that is always difficult)
In the last part of the race, it is a good thing to shorten the strokes a little, and increase your racing pace with quick hands and 3/4 slide.

Next year, you'll crush that bitch. Fly and die, baby!

EC, I do hope you realize that what you did was incredibly impressive. There are people who train their whole lives who do not accomplish as much. I understand the disappointment of feeling like you did not hit your own personal best, and that feeling sucks, but what you did was world class.

One thought - give rowing on the water a try! It will improve your erg scores and, in contrast to erging, is actually fun - I mean, real fun, like in that song by the Tom Tom Club. Okay that was weird. Anyway, all the years I rowed I would never have gone near the erg if I hadn't had the motivation of rowing on the water to remind me why I was doing it. I am sure there are places in Boston that will get you on the water, if you need suggestions I would give Community Rowing a try.

That is really impressive! EC you are something else!

keep up the good hustle!

I don't mean to detract from EC's accomplishment (it is a very good time right out of the box, and many coaches would drool over those times), but by saying she was 24th or even 36th in the world we fool ourselves as crossfitters and underscore the achievement of so many other rowers who don't have their eyes on this thread. I can virtually guarantee that every HW female olympian, of which there are hundreds, pulls a sub 7 2k. I say this not to detract from her accomplishment, but to implore her, if a sub 7 2k is an important goal, to give the erg the intensity and time it deserves.

I have just 3 letters that will enable EC to kick ass next year and continue to do Crossfit....

Crossfit Endurance short course programing, will in my opinion, totally enable EC to kick ass in 2010!

Thank you ALL for the support!

Jan - Thanks for the great race strategy prep info. I'll be sure to give this a try for next year.

Christopher - I have had the opportunity to row on the water, at the CrossFit Concept2 cert. That is a WHOLE different ball game than rowing on the erg! I'd be up for doing it again. As for Boston, yep, we've got a strong rowing community. However, have you been to Boston? Save for 4 months, I have little desire to row on the Charles River most of the year!

Alex - You are correct. I know I do not have the 24th or 36th fastest female time in the world; PLENTY of competitive rowers would easily beat me! I think the main point here was that I finished in the top 20% - sort of the goal a CrossFitter shoots for when entering a sport-specific event.

I just renewed my CFJ subscription. I love the new format, so much content it blows my mind.

On the C2 website they have the results of the 09 crash b sprints. only 10 women broke 7 mins as far as i can tell. these are the national team, elite caliber rowers - some euros, that are rowing 6 days 90 mins + other w/os that probably rival and exceed what we do at CF.

just going in an breaking off these times are pretty amazing. she cant beat me, but i row for hours to try to be sub 7. new to CF my times are dropping like the walmart smiley face. i row in the southern sprints sub regional every year.

just wanted to make this correction. if there were 100's of women that could break a 7 i think they would show up to try to medal.

Just started rowing occassionally and can pull 1:45 pace for a minute.
And you can approach that for 7? Very heady!

Certainly have just a light workout the day before, nothing too heavy, IMO.

Great article and great performance but "In the best lab-rat tradition, an erg-shy CrossFitter/lifter puts a scare into sport-specific stars."? Please.

An athlete "built to row", who does CrossFit (which puts the erg up in the top must-have equipment in a gym) does well in an erg competition and this is a headline grabber?

All over the journal are articles saying how good erg training is, so why is it surprising that Crossfit and erg performance overlap?

CrossFit is awesome with or without all the unnecessary hyperbole, but it's better without it IMO.