01:43 A special series of audio clips called "The Voices of CrossFit" opened the show. Affiliate owners explained why it is so important to support the CrossFit RRG, a form of self-insurance. Host Justin Judkins announced that CrossFit HQ had contributed $40,000 to the cause. He said affiliates are being asked to contribute $1,000 each and trainers are being asked for $200 each. The money buys an ownership stake in the RRG and a say in how it's run. Most of all it buys protection. Justin said: "If you're sued, the RRG will stand behind you. Guaranteed. We're still about $150,000 short of the $500,000 we need to start the RRG. But we've made tremendous progress is the last two weeks -- raising many thousands of dollars a day. One way or another, we are going to make it." For more information, go to www.crossfitrrg.com

03:36 Jason Leydon is the owner and head trainer at CrossFit Milford, CT. Jason is also on won CrossFit traveling squads. He is a coach at both Level 1 certifications and and with Brian McKenzie's CrossFit Endurance. Jason explained how CrossFit works in conjunction with CrossFit Endurance. He explained how runners can actually improve their performance by running fewer miles. Jason also described the POSE method of running.

26:54 Josh Bunch is the owner of Practice CrossFit and is preparing to compete in the Midwestern Qualifier this weekend. It's something new for Josh, best known as a a CrossFitter whose sport of choice is bodybuilding. He talked about how training and eating for the qualifier differs from preparing for a bodybuilding competition. Josh also talked about the recent video of figure competitor Chastity Stone taking on Caity Matter and Jolie Gentry in a workout.

This episode was originally labeled episode 66. 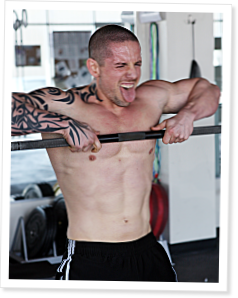 What happened to episode 65?

We are working to resolve technical problems with episode 65. It will be posted as soon as it is available. Thank you for your patience.
-Daniel Freedman
Editor-in-chief

PCF members will appreciate you catching this bad-face pic of our coach. A little payback for all the pain shots caught of us each day.

I finally had a chance to listen to this episode and enjoyed Jason's interview. I find the running and endurance stuff fascinating. Jason mentioned his favourite adidas running shoe but I didn't catch the name. Can someone spell it out for me? Thanks!

What's up with J.J. and Neil? What happened to the weekday radio??

Crossfit Radio (weekday)remains missing from I-Tunes and the Journal. Anyone know a time frame when they are going to start up again. Its bad timing to be off air especially for those who want to keep up with the games etc. Hope JJ and Neil get back on soon.

I second that! Where are those CrossFit Radio Bastards?

Yeah, where is Neil and JJ?

What's happenned to Neil and JJ?
CrossFit Radio has been a big part of our life over the past year, and its not the same without their witty repartee.
We miss those headphone wearing, microphone wielding bastards.
I'm sure the views and opinions expressed here are those of its 17 listeners and their followers!
Graham and Lorraine
CrosFit Dental

Neil and JJ...where are you guys?

JJ! The Solo Flying Bastard! I just listened to the episode over the weekend. Great job hosting on your own. What happened to Neil and why are you guys only doing a show once a week?