Teamwork Gets Athletes to the Games by Rob Orlando, with Jason Khalipa, Eric O'Connor and Patrick Burke - CrossFit Journal

Teamwork Gets Athletes to the Games

Weeks after competing in the 2009 CrossFit Games, many questions are still tumbling around in my head. Among them: is CrossFit really an individual sport? Or is there a team involved? Do athletes compete against themselves or each other? What does it take to get an athlete ready for the CrossFit Games?

I set out to write a personal account about the supporting cast that helped me get to Aromas, California. But then the editors of the CrossFit Journal asked a brilliant question: Is this story specific to me or did other athletes take the same journey to get to the Games?

I sent the following e-mail to all my fellow athletes and quickly found that others had experiences similar to mine:

Each athlete has a “team” that helps them get ready for and compete in the Games. No athlete can do it completely alone. Some of the roles that might have been filled would be: training group, gym members, financial supporters, Oly coaches, fellow competitors, spouses and family members. Every one of these people plays a part in assisting the athlete. They do so selflessly and without expecting any form of payback. And for doing so, they deserve a piece of the spotlight.

CrossFit is a community of special people. We need to spend some time looking around at what an amazing collection of athletes we have playing our sport. It’s a sport where only one athlete competes at a time, but each represents a team of people who have helped along the way. Every athlete, if he or she spent some time, could come up with a long list of people who have played a role in their successes. These people don’t look for the spotlight—but they certainly deserve it. 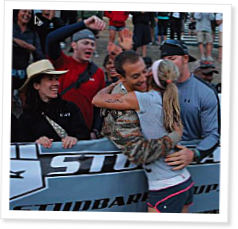 The Story in North East

On Episode 212 of CrossFit Radio, host Justin Judkins interviewed CrossFit success story Diane McKinney, as well as Adam Stevenson, who is one of the owners of Outlier CrossFit… Continue Reading

The North East Regional was all about community.

“Nothing compares to the camaraderie, relying on each other, working together to win,” said CrossFit Brickyard team member Seth St Amand.

One of the best… Continue Reading

The Road to the 09 Games — Lauren Plumey

Lauren Plumey hails from CrossFit Milford where she trains with Jocelyn Secondi and Jason Leydon.

Lauren followed her trainer from a globo gym that closed to CrossFit Milford, and went… Continue Reading

2 Comments on “Teamwork Gets Athletes to the Games ”

Great article about this wonderful CF community. The stories are all inspiring and reminds us of the essence of the human spirit. Thank you.

I think ineed to get my butt in a CF affiliate.