Episode 120 of CrossFit Radio featured Corey Pitsilliti conducting interviews with athletes, judges and other attendees at the regional competition in Australia. During the second half of the show, host Justin Judkins interviewed Central East Regional director and Rogue Fitness owner Bill Henniger. This episode was webcast live at 6 p.m. PDT on Wednesday, May 19, 2010.

3:48 Corey Pitsilliti did a great job interviewing people at the Australia Regional held at the Royal Randwick Race Course on May 8 and 9. Corey was able to interview competition director Mick Shaw, several of the athletes and some of the judges, all of whom gave insight into a great weekend of competition.

32:32 Bill Henniger, owner of Rogue Fitness, was the director of the Central East Regional held in Logan, Ohio, on May 8 and 9. He came on the show to talk about the weekend and what goes into putting on such an event. Bill spoke about his programming and what the experience taught him for next year. He also touched on the business side of Rogue Fitness and how it’s a priority for him to create jobs and keep manufacturing in the U.S. Finally, he gave a sneak peak at what’s next for Rogue Fitness. 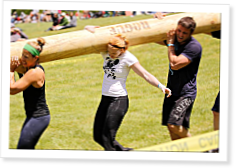 I agree with Bill's statement that the athletes that leave the regional need to have all of the skills to be an active competitor at the crossfit games finals.

On the other hand, the more highly specialized skills the crossfit community demands at the games, the more they become a "fittest crossfitter in the world" instead of a contest for the fittest person in the world.

If we really want to attract elite athletes from other disciplines (I imagine olympic decathletes will want a piece of this in a few years) shouldn't we lower the skill demands in favor of GPP tests of work capacity? What do you guys think?

Bill is legit. He's building a great reputation in the community for doing things the right way. Simple.

JJ...I forgot to mention this, but I've begun listing to more and more podcasts and similar types of media. You are doing an excellent job with the show, and I'm super proud to have you distributing the message to the world.

Our media continues to improve at a rate that is way ahead of the industry. Keep pushing the bar, we're on to something great.

David - Thanks for your comment, I see where you are going with your statement and I think that would be true if all of the WODs at the Games centered around skills that were highly specialized but I would say from looking at the past Games' WODs I'm not seeing that trend, they were focused on GPP skills rather than specialized skills. I do think the GPP practitioner should be able to successfully tackle the odd specialized skill that pops up too(i.e. driving a stake into the ground).

Justin - Thank you and that means a lot coming from a guy with your experience and knowledge. I enjoyed meeting you at the SW Regional.

Justin, Every Sunday when I clean my little box I listen to your show and each show is amazing! I am so proud to be a part of this Community everyone is so first class it blows my mind. I just want to thank you for all that you do and express my gratitude. I have really too many words to say. People like, Bill Henniger,who I never met sounds like the kind of person you just want to be be around like Coach,Boz,Jimi Letchford,Tucker,Lisa Lugo the list could go on and on but great work Justin and keep bringin it.

I guess now there are more than 17 people listening.