2:45 Shanna Duvall and her husband are two of the four owners of CrossFit Asheville in North Carolina. Shanna and her husband are also chiropractors, and while her main responsibility is the affiliate, her husband runs the chiropractic practice. She spoke about how they combine those two worlds, as well as how she has been able to grow their affiliate and train those athletes working for a shot at the CrossFit Games. Shanna talked about the community at her box and what she does to foster that atmosphere.

23:35 A recent scouting report on the Games site identified former Major League Baseball player Logan Gelbrich as one to watch in the upcoming season. On the show, Logan spoke about training at CrossFit LA with Andy Petranek. He gave his thoughts on the $250,000 winner’s purse at the Games and possibly seeing a swimming WOD this summer. He also spoke about his training in the Majors and how that compares to the CrossFit he’s doing now. 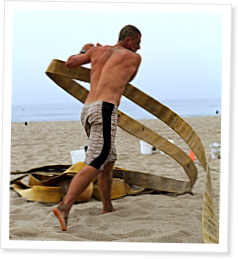 Just wanted to say I think its very cool that crossfit has a couple of chiropractors with an affiliate. As a chiropractor myself I have definately toyed with the idea of opening my own box. Thanks for the inspiration.

That was a great interview. I work with Shanna and have to say that she was humble about the gym's success. If any affiliates are curious about how to grow their box, follow Shanna and Corey Duvall's example. Focus on your current members, treat them like the athletes they will become (w/ programming and attention to recovery) and let them do the marketing for you.

Crossfit Asheville is a great box and the owners are dedicated. As they often say "Just Be Awesome!"


As you may know, I am the broken record with respect to swimming and crossfit.


I have written previously that Crossfit 2011 Games could easily (?) have something similar to an "Odyssey Custom Made PORTABLE Pool", 80-feet x 130-feet, 5-feet deep, costing ~ $40K. After a site visit, I have no doubt the Odyssey crew would yeah/nay the feasibility of a placing a portable pool in either the HDC parking lot or one of the stadiums.


Furthermore, you may recall that Coach Glassman point blank mentions a pool as a possibility during the 2011 Games. He does so during the 2010 CrossFit Endurance Sports & Fitness Expo "Exec Panel". This can be seen at time-stamp ~ 1:58 here ... http://sicfit.com/coverage/237836-SOC-Reebok-Partnership-Address-Orange-County-California/video/365958-The-Future-of-the-Sport-and-the-Community


One can imagine, 2011 Event #2a is either a straight metabolic single event (swim AMRAP) or a multiple modality event along the lines of:
For time or AMRAP
(a) KBS, thrusters, etc (weighted movement)
(b) swim pool-length
(c) Air Squats, push-ups, burpees, etc (gymnastics movement)
(d) swim back pool-length
(e) repeat X rounds


Finish entire thing with Event #2b: Throw a standard USCG life ring as far as possible over dry land or as close to a dry-land target as possible (first contact with ground counts, rolling does not).