Beyond the CrossFit Games: Part 3 by Hilary Achauer - CrossFit Journal

Beyond the CrossFit Games: Part 3

It happened in the middle of Nasty Girls, an infamous WOD that is 3 rounds for time of 50 squats, 7 muscle-ups and 10 135-lb. hang power cleans. Matt Lodin was at the end of the second round, coming out of a muscle-up. As he landed, he felt a sharp, eye-searing pain in his left knee and collapsed to the ground. He tried to get up and move on to the power cleans, but he couldn’t straighten his leg.

Matt went to the doctor the next day and got the news. He had dislocated his patella and shredded the meniscus in his left knee. The only option was surgery—disappointing news only a month before the CrossFit Games Open competition.

“When the doctor told me I needed surgery, I had to figure out if I was going to hold off and go through the Games without the ability to fully extend my knee or lose some conditioning and hope to be fully recovered by regionals,” Matt said.

Once the CrossFit Games Open schedule was revealed as a six-week, worldwide competition, Matt made his decision:

“I was going to get my surgery done when the Open started and use the six weeks of competition as my rehab.” 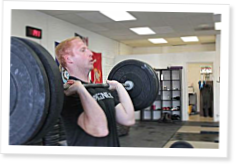 Taking Age Out of the Equation

Hilary Achauer explains how the oldest and youngest athletes in the Southern California Regional approached the competition.

If you’re a CrossFitter over the age of 30, it’s likely that… Continue Reading

The Fountain of Youth

Finding the Fittest: Programming the Games

Is there CrossFit after 60? Hilary Achauer investigates at the 2011 Reebok CrossFit Games.

Some couples celebrate their anniversary by going on a cruise to Alaska. Some throw a party.

Hilary Achauer talks to Tony Budding and Dave Castro about how athletes ended up swimming in the ocean, throwing a softball and flying across monkey bars in 2011 Reebok… Continue Reading

4 Comments on “Beyond the CrossFit Games: Part 3”

Proud of you big guy....one month

Way to represent CFPB beast... Mad hyped to watch you get nasty at regionals!

You are my favorite ginger!