Elise Metts was just out of college when her life changed. A competitive cheerleader in high school and college, Metts spent most of her life training for three hours a day, seven days a week. One night, when she was riding in a car with friends, a drunk driver hit the car. The driver of Metts’ car died, and Metts herself ended up in the hospital with serious injuries.

Metts didn’t walk for six months. Once she started walking—slowly—she found she couldn’t walk or sit for more than 30 minutes without severe pain. Doctors told her she would never run again, she could never do strenuous exercise, she could not lift anything over 15 lb., and if she got pregnant, she would not be able to carry a child to full term or deliver it naturally.

Still in a fair amount of pain and 30 lb. overweight, Metts started working out about a year after the accident. She followed the advice of the doctors and stuck to slowly pedaling on the stationary bike and walking on the treadmill.

Even though she was exercising, she wasn’t satisfied. Then she heard about CrossFit. 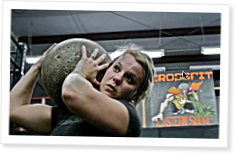 6 Comments on “Bouncing Back ”

Decades of conditioning to liability risk have made doctors hypersensitive. Most are understandably reluctant to even speculate on how much progress a patient in Elise's situation might be able to make for fear of being accused of encouraging the patient to attempt activities that might possibly cause pain or damage.

Patients should be given the chance to understand this and acknowledge that they are willing to go forward on a step-by-step basis in as safe a manner as possible without holding their doctor or trainer liable either for direct negative consequences or for goals not met.

That is what Elise has done in this case. By setting a good example of what can be accomplished, I hope that it will encourage others to find a way to make this happen by design with the encouragement of medical oversight rather than having it continue to be forced to happen without the participation or knowledge of a doctor, simply to protect doctors from liability risk.

This is very inspiring. I let myself go a little bit due to laziness. The hard work this woman went through to achieve her goals is amazing. Good job!

As a general surgeon for 30 years, agree with Dane Thomas comments. Physicians and surgeons are about as good at predicting the future as other humans.....fortunately, Elise meats tooke responsibility for her own health and has had a fantastic result. Good work

I love stories like these, they allow me to put my own struggles in perspective. Great job Elise!

Good job! keep it like that and GOOD LUCK!