By providing water and schools, CrossFit is changing lives in Kenya—and you can help. Mike Warkentin explains.

Functional fitness is on full display in Kenya. Except it isn’t about PRs and Fran times. It’s about clawing out an existence in a country where many people can expect to earn far less than $1,000 US a year.

Here, tires aren’t flipped. They’re repaired and resold in hopes of making enough money to buy life’s necessities. Sleds aren’t pushed to build strength and power. Rather, rickety carts are dragged over rough roads, and many of them are carrying the most precious cargo of all: food and water. Large loads are moved quickly here, but they’re moved with a sense of desperation that has nothing to do with the whiteboard.

But CrossFit is in Kenya, in the village of Dzendereni, just outside the crowded port of Mombasa on the Indian Ocean. In Dzendereni, children learn in the CrossFit school, a building filled with desks and equipped with a system to collect rainwater to replace the muddy river water students once had to drink.

From May 28 to June 1, Coach Glassman took CrossFit staff to see the company’s work in Dzendereni and take the message back to the global affiliate community. 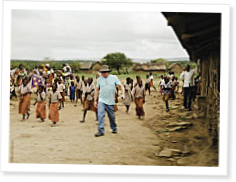 Fear and Loathing at the Arnold

Mike Warkentin ventures into the savage heart of the Arnold Sports Festival.

People are lined up for the Arnold Fitness Expo long before it opens.

The line stretches almost from one end of… Continue Reading

3 Comments on “Live and Learn”

Great read as always Mike and cool format, it pales only to the cause at hand. We are in, whatever we can do to help, we will be there...jb

One more reason I love CrossFit. Changing lives in so many ways.