It doesn’t get more all-American than Marcus Hendren.

Hendren grew up on a dairy farm in Johnston, Ohio. His grandfather started the farm in 1956, and Hendren spent his childhood working on the farm alongside his father and brothers. When other kids were off at the pool or playing summer baseball, Hendren and his brothers were busy feeding baby calves.

In high school, Hendren was a star football player. He was the top rusher and scorer in the state of Ohio his senior year and earned state player-of-the-year honors in Division V. Hendren served as team co-captain for the football, basketball and baseball teams his senior year and also earned varsity letters in track and field and lacrosse. His athletic accomplishments and academic excellence earned him admission to Cornell University in New York. Hendren had a successful football career at Cornell and graduated with a bachelor’s degree in business in 2011. After graduation, he did what was expected of him: he returned to Ohio to work on the family farm.

However, Hendren was not the same person he was when he left Ohio. While in college, Hendren found CrossFit. The discovery had a profound effect not only on his body, but also on the way he viewed the world—more specifically, his opinions about food and the way it is produced in our country. 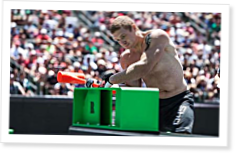 5 Comments on “The New America”

Fight for what you believe in Man!! the CF Community has your back

Marcus, I am so happy to read this story. I had known you come from a farming background in Ohio, and assumed it was conventional soy and corn, like mostly all Midwest farms. It is so encouraging to hear that you have the courage and determination to carve a different path, a better way. I started my Crossfit journey this year, and over the past couple of years have come to the same realizations - that we need local, sustainable, natural farming to replace the large industrialized farms that dominate today. Our nation's health depends on this, and it is up to us to change it! I have confidence that it will change, because once the masses fully realize that the health problems facing the population is a direct result of he food we eat, they will seek out healthier food and the smaller, local farms will win out. The transition is already happening as I see more and more people turning to farmers markets and CSAs for their food.

So, rock on and make your farm a reality. The market will be there. And you are one strong mofo!! I'm totally rooting for you at next year's Games!

This was an encouraging article, and I feel like echoing the comments above.
Kudos on your determination Marcus! My wife and I know that we vote with our grocery dollars and that's why CSA's and local farmers will get our support. We need more farmers practicing polyculture & permaculture. I hope that with intelligent committed farmers like you leading the way and crossfitters following we can convince our friends, families, and neighbors that there is a way around industrialized food!

Marcus if you get an internship at the Poly Face Farm I'll visit, I love that place.

Good luck if you decided to open a farm similar to Joel's farm.