Tyler Quinn lay in his bed, hanging on to every word announcers Justin Judkins and Sean Woodland uttered.

“I was in my room listening to the stream and holding my breath,” he said.

More than 50 minutes into the phonecast of the Camp Pendleton swim-bike-run event that opened the 2012 Reebok CrossFit Games, Judkins described Deborah Cordner Carson as “still battling those waves” and “battling the surf.”

Last year, the athlete withdrew from the Games in the opening event because of her fear of open water. The first event included an ocean swim near the Santa Monica Pier.

Then Quinn heard the magic words come from Woodland’s mouth: “Deborah Cordner, we just heard, has actually rounded the last buoy. She is coming out of the water. She finished the event. She’s obviously out of contention for this one, but huge, huge victory—personal victory—for Deb Cordner because, again, if she had tapped out, it’s over.” 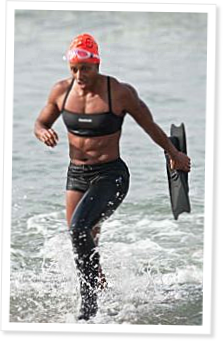 Rich Froning overcomes all adversity and pressure to stand atop the CrossFit Games podium for the fourth consecutive year.

It was seconds before Sunday’s… Continue Reading

After being among the youngest individual competitors at the regional level of the 2011 Reebok CrossFit Games, 19-year-old Trevor James wants to make CrossFit his life and career. Andréa Maria… Continue Reading

Chris Spealler has yet to decide if he will try to qualify for next year’s CrossFit Games. Time, he said, is what’s holding him back. His wife, meanwhile, wants him to compete again… Continue Reading

3 Comments on “Slapping Fear in the Face ”

Great article about a great person. I drop in at CF St. Paul quite a bit, and Deb seems to always be there, smiling warmly and helping people.

Thanks cool. Good for her. I've seen the "fear of the unknown" before and it can be super intimidating.