The Words of Wisdom are from Josh Bunch at Practice CrossFit: How to Get Over 100 PRs in a Week. To help readers hit PRs, Bunch offers great advice including doing auxiliary and mobility work, using percentages, lifting heavy once a week in a group and being relentless.

5:53 Jen Osborn is the head trainer at CrossFit Cornerstone in West Chester, Ohio. She explained how she found CrossFit and why she was addicted right away. She talked about the demands of the job but also why she wouldn’t trade it for anything. She described the mission statement at the box and why it’s an important guide for the athletes. Osborn talked about overcoming occasional frustrations as a head trainer, and she detailed how she connects with women who are initially intimidated by the look of a CrossFit gym. She also described the affiliate’s foundations class and how it has evolved.

29:02 Rebecca Voigt came on the show to talk about the Team U.S.A. vs. Team Europe competition in London. The event will be streamed live on the CrossFit Games website starting at 12 p.m. PDT on Oct. 13. Voigt talked about the members of Team U.S.A. and how they’ve been training over the past four weeks, and she described how honored she was when Dave Castro asked her to participate. This year, Voigt has a new coach, Ben Bergeron, and she described the gains and improvements she’s made with him. The SoCal athlete also changed career paths and is now working full-time as a coach and trainer, which offers an interesting set of challenges when it comes to her own training. 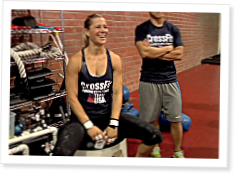