Mike Burgener used to be “real big” on using the coaching cue “pockets” for anybody performing the snatch or clean.

“For years I emphasized ‘mid-thigh’ to ‘pockets,’” said the longtime Olympic-weightlifting coach. “I emphasized the hell out of it.”

Then he noticed one of his own trainers giving the “pockets” cue to a beginner. The result: the athlete did not begin accelerating the barbell until it was at his pockets, or hips.

“Whoa, this is way too slow,” Burgener recalled saying to himself.

Instead, the bar should begin its acceleration earlier—once it’s past the knees, he said recently.

“People are going to seminars and coming back and teaching pockets to their clients,” Burgener explained. “The person wouldn’t start acceleration until they hit pockets. It became too slow. They end up missing 6 to 8 inches of acceleration.”

With that in mind, Burgener has slightly changed how he teaches the Olympic lifts to beginners and more advanced athletes. 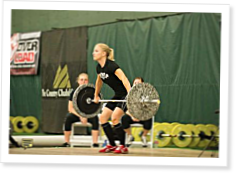 As a trainee this is great stuff, thanks!