Dogs have been a part of CrossFit from the very beginning. Photographer Michael Brian puts his lens on the descendants of Athena, the original CrossFit dog.

Photos started regularly appearing beside the CrossFit.com WOD in May 2003. Shortly thereafter, the small CrossFit community outside Coach Greg Glassman’s gym in Santa Cruz was introduced to Athena the pit bull.

Athena regularly appeared beside athletes who were doing all the things that had gotten Coach kicked out of a host of commercial gyms, and by the second issue of the CrossFit Journal, she was part of its masthead. Athena is still a prominent part of the Journal home page, and she’s the favicon beside the URL on CrossFit.com.

“Athena would sit under the stairwell, in her bed, under a blanket, and with each new arrival you’d hear a thump-thump of her tail as she’d recognize the regular voices,” Coach Glassman recalls. “Whenever a new person would come into the gym, she’d react to the new voice and our greetings with growls and a semi-menacing approach, sometimes blankets still on top of her.”

CrossFit Director of Training Nicole Carroll, who trained at the original CrossFit box, recalls that Athena was never on a leash and was “ever present” in the gym. The pit bull’s specialty was the box jump: she’d hop up on a plyo box and Coach would clap for her, which made her very happy indeed.

CrossFit Operations Manager Lynne Pitts, an avowed cat person, was so taken by Athena’s calm, regal demeanor at a very early CrossFit course that she said “it was really the first time I could see why people might like dogs.”

L.A.-based photographer Michael Brian has been shooting CrossFit images for two years and specializes in pet portraits, making him the perfect person to capture CrossFit beasts and their four-legged friends in the rugged boxes both call home. The original CrossFit box is no longer around, nor is Athena, but memory of both is very much alive in CrossFit gyms and garages everywhere. 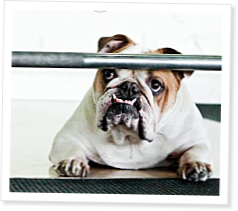 In Part 1 of this series, original firebreather Greg Amundson recalls the very first days of a movement that’s now a global phenomenon.

In December 2001, I heard rumors of… Continue Reading

Sorry for your loss. It's terrible when we loose a family member. Athena will live on in so many crossfitter's minds.

I love dogs and love this article. I am thankful I belong to a box where Coach Tami Ough and the other members approve and welcome my stocky Lab, "Claude". Its become one of his favorite destinations. Claude's favorite WODs include running-go figure!