At 23, Johnny Di Gregorio was 425 lb. Three years later, he lost nearly half of that weight by following CrossFit.com programming. But that’s not the most interesting part of Di Gregorio’s story.

In January 2011, two years after he competed on Team CrossFit Academy’s squad at the 2009 CrossFit Games and opened his affiliate, Di Gregorio decided to forgo the training methodology that changed his life for the better. Instead, he purposely regained 100 lb. to be more competitive in the sport of Olympic weightlifting.

“I resolved to spend two years to doing everything, no matter what, to see how far I could take weightlifting,” he explained.

“I realized that weightlifting is not about health and longevity,” he said. “It’s about being strong enough to lift the weight.”

That’s when Di Gregorio put an end to his competitive weightlifting career.

“I decided that I wanted to get healthy again,” he said.

And so he came back to CrossFit. 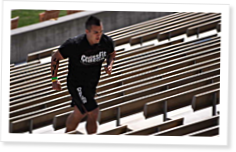 I love this article, Andrea. It's pretty much explains why I've let Oly take a backseat to WODs right now. I need to be healthier and all around stronger. I still haven't met the goal I set 2 years ago to be able to do a pull-up.

And to be brutally honest, I got really bored with only doing snatch and C&Js.

I like this article, but I think a lot of people will believe it's just disparaging Oly lifting. If you read it closely, though, I think it's more an article about personal goals. Mr. Di Gregorio's goals don't match up with the goals of an elite Olympic lifter. Instead, his goals line up well with Crossfit. That's neither good nor bad.

The only real questions are what you want, and what you're willing to sacrifice to get it. Mr. Di Gregorio has learned part of his answer to that question.

It is amazing how much your pull-ups are affected. I've been spending more time on the Olympic lifts as well. My metcons and most other areas remained at a decent level, but pull-ups were not there anymore. There definitely needs to be balance and periodization to what we do.

I can assure you that there was no intention on Andrea's part or mine to speak poorly of Competitive Weightlifting, rather to highlight the cycle of focus my training and health have taken me through over the years.

There are plenty of healthy weightlifters, but few of them exist in the Super Heavyweight Classes. When I first began lifting I was lucky enough to meet Casey Burgener. He was a Super Heavyweight lifter who had just finished as an alternate on Team USA at the Olympics. He had recently lost over 70lbs of bodyweight purely for health reasons. Carrying around that much weight while training that hard is very taxing on the body. This was something my coach reminded me of on a daily basis.

Weightlifting (in any weight class) at the competitive level carries with it A LOT of volume.

I would train 5 days per week. The average training session would last 2-3 hours. The majority of my lifts in each session were over 80% of my projected maxes. We would squat EVERY DAY.
To keep up with the demands of training, I also did 1-2 hours every day of recovery and rehab.

I had to assess my situation:

- I was riddled with injuries
- My affiliate was growing and was requirring more of my time training my staff and keeping on top of the growth.
- I became a Home Owner
- I married my wife
- We wanted to start a family
- As my lifting progressed, so did the volume in my training sessions.

That is a lot of time and stress to balance. Had I been a 18 year old in residence at the Olympic Training Center, devoting my life to lifting, this may have been something maintainable. However, it was beginning to be unmanageable.

Both the major injuries I sustained were in the heat of competition and that is just part of being competitive in any sport. It wasn't the fault of weightlifting, it was my fault for wanting to win. It's part of the game.

The rehab process for my shoulder was difficult for me on an emotional level and that took a huge toll on my life that wasn't worth going through again when I was diagnosed with a torn meniscus.

Like Coach said, I was on my way to being competitive at the national level but I wasnt there yet and at my age (considered to be old for my weight class) I wouldnt be able to reach a world-class level as an athlete.

I had a goal that I was not able to meet with weightlifting, and being a competitive person, that still tugs at my ego a bit. The decision to leave competitive lifting after investing so much time and energy to it was one of the hardest things I have ever done.

But the greater goals of having a great relationship with my wife, being healthy for our future family and having an Affiliate that can provide a privileged life for my family are more important to me than a 200kg Clean & Jerk.

I love weightlifting, and I love teaching the lifts as well. Coach Takano is, in my opinion, one of the greatest lifting coaches in the world. Having him train at my affiliate every day and having him coach me has given me a chance to earn a deeper understanding of weightlifting than I could have ever imagined.

I will always carry a deep passion for it. I give the sport and the athletes the highest respect and regard.

I also love CrossFit. Had it not been for CrossFit, I might not have lived to see 30.

Healthy, functional, and full of energy!

One last thing: My inability to do pull ups was because of the shoulder injury. In the beginning stages of lifting, coach Takano often has his athletes perform strict pull ups to aid in building postural strength. As my bodyweight increased, I simply wouldn't want to demo kipping pull ups in class without properly warming up as the kip would have a greater stress on my shoulders carrying as much weight as I did. The injury then took pull ups out of the game. With my current training, as my bodyweight is dropping, I am continually rehabilitating my joints and have incorporated pull ups and all their variations in regularly.

If you guys would like to keep up with my training and progress, I post a weekly entry on my blog at:

Thanks so much to Andrea for writing such a great article.

You say: "But the greater goals of having a great relationship with my wife, being healthy for our future family and having an Affiliate that can provide a privileged life for my family are more important to me than a 200kg Clean & Jerk."

Also, I applaud you for really throwing yourself at something new. It turned out not to be the best fit, but I think a lot of us fail to grow because we fear that things won't work out like we plan. I think the best part of this article is that it shows forays into the unknown are a good way to learn about yourself and grow as a person. I bet your clients are going to benefit enormously from what you learned in your Oly lifting training.