Prescott, Ariz.—On June 30, 19 members of the Hotshot team died fighting a fire that grew to more than 2,000 acres in Yarnell, an old gold-mining village with a population of roughly 650.

To commemorate the fallen and raise money for their surviving family, CrossFit Inc. held a memorial workout at Captain CrossFit in Prescott: six rounds for time of 30 squats, 19 135-lb. power cleans, 7 strict pull-ups and a 400-meter run that took athletes past the makeshift memorial that is the chain-link fence surrounding Prescott Fire Department Station 7. As of press time Saturday afternoon, more than US$128,000 had been raised for the families via Hotshots19.crossfit.com. At the Prescott event alone, $21,671 was raised from attendance, T-shirt sales and food.

The workout was created with a rep scheme and movements specifically honoring the 19 Hotshots, who were required to perform seven strict pull-ups and to run, said Tony Budding, CrossFit’s Director of Games Media.

“The intent behind Hero workouts is for CrossFitters to honor the memory of the fallen,” he said. “It’s not just about fitness but the struggle and the misery. Most Hero workouts should make you want to quit—but you don’t.” 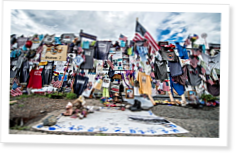