Big Easy Does It by Andr&#233;a Maria Cecil - CrossFit Journal

It’s difficult for Tiffany Kasunich to articulate what it’s like living in New Orleans, La.

“It’s just unbelievable. Sometimes it’s hard to put into words for people who have never been here—just the fried food, the portion sizes. The excessive alcohol that’s available down here is just mind-blowing.”

If it’s not deep fried, it’s coated in butter and salt. Sometimes it’s both. And when it comes to booze, you’re free to walk around the city with your poison of choice. Hell, there are even drive-thru daiquiri stands.

All the more reason, Kasunich said, to educate members of newly affiliated 4th Quarter CrossFit about nutrition. And not just that, but also to keep them from the influence of the world’s most notoriously decadent city during the season of encouraged overindulgence.

Affiliates the world over are fighting the same battle—trying to keep members away from the seductive temptations of pumpkin pie and brandied egg nog. But in a place like New Orleans, it’s less a battle and more a war. 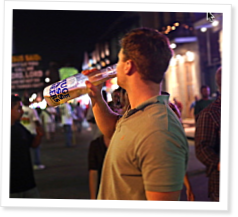 Researchers of a study that looked at U.S. health over 20 years were surprised to find diet played a dominant role in burden-of-disease risk, surpassing tobacco use. Andréa Maria… Continue Reading