The Thin Red Line of Fitness

That moment when your lip starts quivering, your face goes numb and you realize you probably went out too fast. Emily Beers investigates the pros and cons of “red lining” during a workout.

If you’ve spent any time at a CrossFit box, you’ve seen it happen. It might have even happened to you.

Usually, it’s painful to watch. Often, it’s unnecessary, avoidable. The Fly and Die, the Crash and Burn, the Red Line—all usually look something like this:

“We’re doing Tabata push-ups today. Choose a number you think you can maintain for all eight intervals. Be conservative here—it’ll sneak up on you,” warns the coach. “Your score is the lowest number you get in any of the eight intervals.”

Those who have been here before know what’s about to happen to their shoulders, pecs and triceps. So they take their coach’s advice and choose a conservative push-up number. But there’s always one dude who ignores the part about being conservative.

“Screw it, I can hold 16 push-ups each interval,” he thinks to himself with supreme confidence.

By Round 6 he’s at five push-ups, though he musters two or three valiant attempts at a sixth, squirming aggressively to lock out his elbows, only to give up and dramatically plop flat on his chest. When all is said and done, his final Tabata push-up score is a meager three. 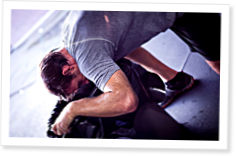 Visiting other affiliates for a workout… Continue Reading

This is the final part of Episode 1 CrossFit Flood.

In this Part 3, Boz and Todd start with an interview of Steve Tankersly, the owner of CrossFit Flood. Then, it’s on to the… Continue Reading

This is third part of episode 3 of the Boz and Todd experience. It took place at the United States Military Academy at West Point, New York when Boz and Todd… Continue Reading

Tony Budding and Jimi Letchford of CrossFit HQ staff were invited to teach a group class at Practice CrossFit. Josh Bunch, the gym’s owner, described a number of… Continue Reading