Researchers are discovering exercise—especially intense exercise—can be an effective part of treatment of addiction, but it isn’t the only part.

The solitary-confinement cell at Florence State Prison in Florence, Ariz., is 8 feet by 5 feet. It contains a bed and a toilet. Prisoners in the hole are permanently shackled, and they spend 23 hours a day in the tiny cell.

Michael Gonzales spent five years in that cell. He lost 60 lb. and got so pale he could see his veins through his skin. As far as Gonzales was concerned, prison was his life. He was serving a 36-year sentence, he’d been using drugs since he was 9, and he’d been in gangs since he was 12. Addicted to meth and heroin, deeply committed to gang life, he was a lost cause. History, statistics—everything—pointed to failure.

Few longtime addicts escape the clutches of addiction for good, but this year will mark seven years of sobriety for Gonzales. He’s been out of prison for five years. He has steady employment and a family.

Somehow, Gonzales beat the odds. So what’s his secret? Other than an iron will, it’s a combination of intense daily exercise, a strong community and 12-step meetings. Exercise on its own is not a cure for addiction, but growing evidence suggests it plays an important role in helping addicts recover and avoid relapse.

“CrossFit gives me an outlet,” Gonzales said. “It means the world to me. Without it, I would be using and back in jail.” 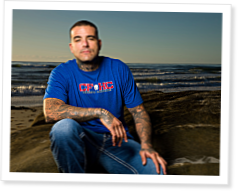 6 Comments on “Sweat and Sobriety”

I have been clean and sober for 15 years now. Exercise and nutrition have been an important part of my recovery as well, along with a 12 step recovery program. Its great to hear about others who are making positive changes in their lives and fitness is an integral part of their recovery. The community and brotherhood that comes with belonging to an affiliate is great motivation to stay on the recovery path.
Mark A

Great story. I have been down this same road and have become better everyday because of CrossFit. Keep the focus!

Amazing story! Been sober for 10 years and couldn't agree more with this article and the approach. Spiritual, mental, AND physical! Crossfit has been a HUGE part of my recovery. And most definately an outlet. I also agree with Mark. The community and comradery within an affiliate just adds to having the family from a persons recovery based community. Thanks for the great article!

I'm a recovering meth addict, Ten years clean. I struggled with all the normal things and was diagnosed with everything from sever depression, bipolar, schizofrenia. And told that for all of these things I would need to be on medication for the rest of my life due to the permanent damage I did to my mind. I started CrossFit and realized what I was missing. I've spent the last four years free of medication and I am now happier, healthier, and stronger both mentally and physically than I ever thought I was capable of being. Quitting meth was one thing, learning out to function and deal with the world sober was another. Crossfit didn't get me off the medications and make me happy, it gave me a way to get off the medications and be happy that worked. This was a great article to read. "Crossfit, saving the world from obesity and antidepressants one beautiful mind at a time"

Your life stories are exactly the reason I am so passionate about being a part of this community as an affiliate. As alcoholism and addiction have controlled members of my family, it warms my heart and gives me hope to hear about each of your successes in maintaining your sobriety! Stay focused and keep your eyes on sobriety!