I They Wed by Chris Cooper - CrossFit Journal

One man’s sin is another man’s commandment.

Though illegal, polygamy is still practiced in Utah, Arizona and other small pockets of the United States. Driven from the public eye, plural marriages are often the subject of scorn and always under legal suspicion.

Though most polygamous groups are Mormon, they’ve been disavowed by their own church and call themselves Fundamentalist Latter-Day Saints (FLDS) or other names. They still follow the teachings of the Book of Mormon and Joseph Smith, including his most infamous revelation: recommended marrying of multiple wives. But not all polygamous groups are the same.

“When we get publicity, it’s always negative, and everyone always thinks that it’s basically the same religion,” said Lorin Zitting of the Works of Jesus Christ Church. “Everyone thinks that there’s child abuse or underage marriage in polygamy. That’s not a part of polygamy. It may be a part of some extreme versions of polygamy.”

In addition to polygamy, Smith also instructed Mormons to take care of their bodies, as well as their souls. Polygamous families in Southern Utah have followed his instructions, they believe, in the best possible way, and the desire to care for the body as a vessel for the soul has led Lorin and his two brothers, Roy and Allen, to CrossFit. 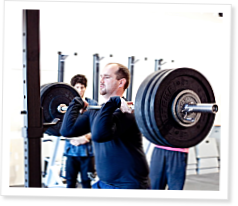 The Cogni-Gym: From Whiteboard to Chalkboard?

CrossFit Inc. has revolutionized the business of fitness, and now hosts of others are riding the wave. Chris Cooper reports.

Can workouts help produce smarter kids? Chris Cooper has a study lined up to answer that question.

Imagine a drug that would put you 33 percent ahead of your peers, nationwide, on standardized… Continue Reading

A Workout to Remember

USA Memory Championship tests the skills of competitors who can memorize a deck of cards in 60 seconds.

all that for "they do crossfit" what a waste.

Weirdest article ever. Not sure what polygamy has to do about CrossFit. There are people from all different religions, cultures and backgrounds who do CrossFit.

Uhhh...needless to say the Journal has lost its' way...I for one will not be renewing and this is the last day I will look at Journal content. Wierd stuff lately.