His arms were pinned beneath the wooden dowel. Standing behind him, an attacker pulled the dowel tighter against his forearms. Both men struggled to maintain their footing. Then, with a sudden maneuver, the assailant further tightened the dowel and took his target to the ground with a thud.

Dmitriy Ryaboy and Jeff Galli continued to take turns putting each other in compromising positions with the help of the wooden implement during the Sambo class on April 21 at FitFight Training Center in San Francisco, California.

“These are the moves I’ve been looking for,” Galli excitedly told Ryaboy as he stood up from the most recent takedown.

Still, practicing the Soviet self-defense method with a wooden dowel in shorts, T-shirts and bare feet could never duplicate a battle with 70 lb. of medieval armor and weaponry.

The men who trained at FitFight were preparing to take to the grounds of a 558-year-old castle in Belmonte, Spain, less than two weeks later to pummel competitors from 22 other countries with swords, axes, polearms and maces—all to become International Medieval Combat Federation world champions.

Several members of Team USA are using CrossFit to supplement their training for the competition, and they say the fitness program helps them whenever it’s time to thrust halberd into helm. 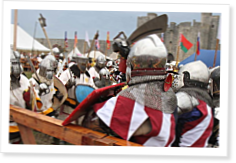 In a sport based upon the unforgiving, brutal armored battles of medieval Europe… Continue Reading

After missing a post-college shot at the NFL because of the 2011 lockout, Will Johnson became determined to make it to the big league. CrossFit, he says, made the difference. Andréa Maria… Continue Reading

When Syn Martinez walked into the arena… Continue Reading

After an accident left her without the use of her legs, Chile’s Francisca Mardones discovered wheelchair tennis. And the rest of the world discovered her. Andréa Maria… Continue Reading