Lords of the Realm by Andr&#233;a Maria Cecil - CrossFit Journal

In a sport based upon the unforgiving, brutal armored battles of medieval Europe, it was Team USA who proved winningest at the International Medieval Combat Federation world championship.

But what some call irony, team members quickly dismiss.

The modern—if you will—pastime of medieval combat attempts to recreate the sport, not the societies of the Middle Ages, Team USA member Scott Stricklin noted via email.

“And hey, isn’t chess from ancient China? Yet the Russians have mastered it,” he wrote.

“It is easily forgotten now in the days of voluntary military service by a select few that our country was birthed by warrior-statesmen,” Saran, who also is CrossFit Inc.’s general counsel, wrote in an email.

Steve Schroeder, another man on the team, stated it simply:

“The draw of the sword is universal.” 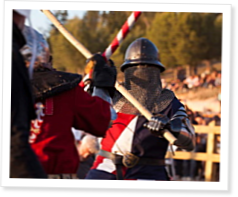 His arms were pinned beneath the wooden dowel. Standing behind him, an… Continue Reading

Most CrossFit athletes know the cramping, burning ache in the forearms caused by Fran, but few have pushed through that to fire a gun at a target.

At a Nov. 16 competition in Florida… Continue Reading

Dave Re was awarded title of Grand Master by the US Practical Shooting Association in September, 2007. It is their highest classification, but it didn’t mean that he was… Continue Reading

CrossFit Striking is a new specialty course offered through CrossFit.com. This course has been developed by Martial Arts Masters Hall of Fame inductee and LAPD SWAT Team member George Ryan to… Continue Reading