On Episode 376 of CrossFit Radio, host Justin Judkins interviewed this year’s winners of the CrossFit Games Open. Two-time CrossFit Games champion Annie Thorisdottir is featured in the first half of the show, and Mathew Fraser joins Judkins on the second. This episode was webcast on April 8, 2015.

1:00 After recovering from an injury that sidelined her in 2013, Annie Thorisdottir returned to form in 2014, finishing second at the CrossFit Games. She followed that up with a win in this year’s Open. “Iceland Annie” gave her thoughts on the Open and described what the next six weeks will look like as she prepares for the Meridian Regional, to be held May 29-31 in Copenhagen, Denmark. Thorisdottir is heavily involved in CrossFit affiliates in both Iceland and the United States, and she talked about how she manages her training and her business interests. She ended by describing what it’s like to work out with “The Dave Castro,” as the Director of the CrossFit Games is known on social media.

12:34 Mathew Fraser finished second to Rich Froning at the CrossFit Games in 2014 but evened the score by taking top spot in the Open in 2015. The two competed against each other live in Massachusetts immediately after Workout 15.1 was released, and they danced at the top of the Open Leaderboard right down to the wire. Fraser talked about how he was able to lock down the competition by tying for first in the final Open workout. The athlete from Champlain Valley CrossFit said his fitness has improved over the past year and explained how he’ll handle the pressure that comes with being a favorite to win the CrossFit Games. First, Fraser will have to qualify for the Games at the East Regional, set for May 22-24 in Hartford, Connecticut. As he prepares for regionals, Fraser said he plans to keep training fun despite his lofty goals. 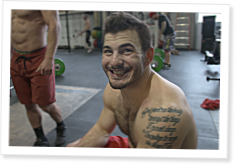