On Episode 378 of CrossFit Radio, host Justin Judkins interviewed Chelsey Hughes, who finished seventh overall in the CrossFit Games Open and first in the North East. This episode was webcast on April 22, 2015.

1:50 Hughes is an experienced competitor who was part of the Brick CrossFit team that finished 13th in the Affiliate Cup at last year’s CrossFit Games. In 2015, she’ll be competing as an individual, and she explained why. While her results in the Open have given her confidence, she knows the regional round of competition will be very challenging, and she described how she’ll use her team experience to help her perform solo at the East Regional, to be held May 22-24 in Hartford, Connecticut. Hughes talked about how her training has evolved to include daily mobility work, and she detailed how she has moved around the United States in the pursuit of fitness. 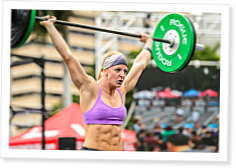