2:14 Jason Ackerman recently sold his third CrossFit affiliate and moved from New York to Florida for better weather. He talked about why and how he sold the affiliates, and he said it was refreshing to transition from business owner to coach. As a former gym owner, Ackerman might be one of the most experienced employees in the community, and he detailed different suggestions he’s made to help affiliate owners find success. A member of CrossFit’s Level 1 Seminar Staff, he said he works hard to ensure everyone finds value in the seminar—even those who have a great deal of CrossFit experience.

14:56 Tops in the South East, Travis Mayer also placed seventh worldwide in the Open. He talked about how he balances training with running CrossFit Passion in Alpharetta, Georgia, and he described some of the things he’s done in order to find greater success in the CrossFit Games. Mayer said he’s been working with a sports psychologist and explained how he motivates himself on days when training feels like a grind. With regionals quickly approaching, Mayer shared the tests he’d offer competitors if he were programming the events. 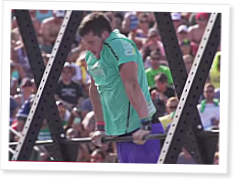