It’s in our homes; it’s in our universities. It lurks in the corners of our children’s schools, and it won our loyalty with its pocketbook and a mountain of sugar.

It’s Big Soda, and it’s got us right where it wants us: addicted.

Recently, San Francisco decided to do something about it.

On June 9, 2015, the San Francisco Board of Supervisors became the first in the U.S. to pass legislation requiring warning labels on posted ads for sugar-sweetened beverages. The legislation also banned ads for sugary beverages on city property and the use of city funds to purchase sugary beverages. The ban includes sweetened coffee drinks as well as sports drinks such as Gatorade.

“This is a public-health crisis in the making,” San Francisco Supervisor Scott Wiener said in a phone interview.

Warning labels will occupy 20 percent of ad space and read as follows: “Warning: Drinking beverages with added sugar(s) contributes to obesity, diabetes, and tooth decay. This is a message from the City and County of San Francisco.”

Less than a month before the legislation was passed, San Francisco State University announced it was looking for a deal with Big Soda, issuing its first Request for Proposals for exclusive campus pouring rights. 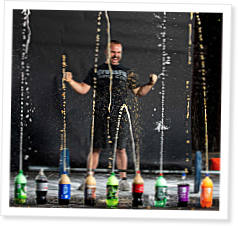 Sugar and Diabetes: Myths and Misleadings

On Nov. 19, a group of about 20 college students in San Francisco, California, managed to do what countless community leaders and… Continue Reading

Type 2 diabetes has become a global epidemic. Despite growing evidence implicating sugar as its cause, Big Soda and… Continue Reading