Story in the East by Michael Dalton - CrossFit Journal

Story in the East

The 2015 East Regional brought Canada East and North East athletes together in a battle for the coveted spots in the CrossFit Games. Heading into the weekend, two athletes were regarded as “sure things” to stand atop the podium at the end of the weekend.

“You never want to say a guy is a sure thing,” said “CrossFit Games Update” host Sean Woodland, “but Mat Fraser’s about as close as you’re gonna get to that.”

Perennial CrossFit Games qualifier Michele Letendre was also considered a shoe-in coming off a fourth-place finish at last year’s Games—her best finish to date. With 2014 Canada East Regional winner Camille Leblanc-Bazinet competing in the South Regional in 2015, the top spot was Letendre’s for the taking—and she seized it. 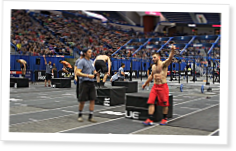 After Day 1, Games veteran Alex Nettey sat atop the Leaderboard in a spot many had reserved for Kyle Kasperbauer, who… Continue Reading

The Story in Mid Atlantic

The 2014 Mid Atlantic Regional went down in Fairfax, Virginia, during the third week of regional competition. The region ultimately sent one man and one woman to the CrossFit… Continue Reading

What was it like to experience the Europe Regional? Join Sevan Matossian on a journey through Reebok Stadium to witness the crowds, the athletes and the battle to get to the Home Depot… Continue Reading