The rain sounded like gunfire as it pelted John Franklin’s home in Hoboken, New Jersey, one night in June 2013. Though it was already past 10 p.m., he pulled on his boots and drove the seven blocks to Hudson River CrossFit, the affiliate he was in the process of opening after months of leading free park workouts.

He was just weeks from the grand opening date, and with the gym sitting right at the city’s lowest point, he feared the heavy rain might seep inside.

He heaved the garage door open and flicked on the lights.

“The floor looked kind of like an infinity pool,” Franklin recalled, unable to tell where the water ended and dry cement began.

Before he had the chance to reach for a mop, he heard a low gurgle come from the direction of the bathroom. In a few seconds, the gurgle became an explosive sputter as the drains in the gym’s two sinks, showers and toilets began spewing sewage in succession “almost like a fountain show,” Franklin said.

As Franklin stood ankle-deep in sewer refuse, he thought of the three friends who had showed up to his park workouts.

“Am I just making like really bad life choices?” he asked himself. “Because we had no idea how this would actually work—or would anybody actually sign up for this CrossFit thing?”

Today, Hudson River CrossFit boasts around 250 members, one of two affiliates that make up Flipside Performance (the other is Bowery CrossFit in Manhattan, New York, which Franklin opened at the end of 2013).

With heavy rain flooding Hudson River CrossFit about once a month, Franklin and his staff have become pros at keeping their heads above water, loading all their equipment into an elevated storage room every time the weather report predicts a storm.

“We’re very handy with a Shop-Vac these days,” he said. “That’s how you get all the water out, and then you have to go through the whole process of disinfecting it.”

To disinfect the 2,800-square-foot space, Franklin shells out about US$600 each time for a professional sewage-cleaning service. Adding backflow preventers to the drains would cost nearly $30,000 and require a total bathroom tear-up, and with real estate at a premium in the area adjacent to New York City, moving is out of the question.

What keeps him going?

“The community,” he said.

Challenges are just par for the course, Franklin explained: “It’s all part of the game. There are certain points ... where I get a little beat down, but in perspective, my life is fantastic. I have a staff that I love, I have members that I love, ... I get to share something that I’m very passionate about with other people, and I’m making a living doing it.” 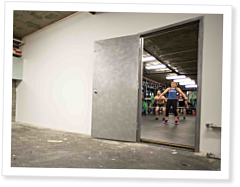 Lindsey Barber gripped the wheel. Most of the 30-mile drive between Unity and Cut Knife, Saskatchewan… Continue Reading

It was well past 1 a.m., and darkness blanketed the city of Derry, Northern… Continue Reading

Some clients prefer polished brass pull-up bars, while others like a little rust on the barbell.

Adam Gonzales talks about finding acceptance in a CrossFit gym, where effort is the only thing that matters.